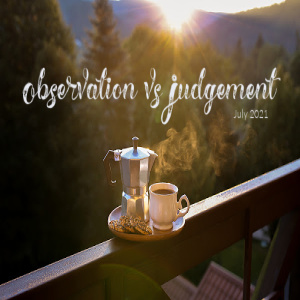 Observation and Judgement go hand and hand.  When you observe something, you immediately have a thought about the observation. That thought is a judgement based on how you have observed the “something”.

This is the nature of being human.  Observation then judgement.  For example, each morning I observe the weather.  This observation sends information to my brain that then thinks an uncountable number of thoughts based on information that is stored in my brain.

The result of this observation is a judgement.  That judgement then leads me to a thought. In this case the thought is about what I will wear today.  If it’s hot I will wear something cool, if it’s cold I will bundle up, if it’s raining, and so on.

My wife and I have some very athletic friends that we occasionally visit.  They are very athletic. Athletic to the point that they never stop.  Like never.  And good for them because they are happy.  And, on several visits, I have felt judgement.  On many occasions I observed the feeling of judgement about not being athletic. Or so I thought.

During a recent visit I was having a conversation with one of these friends and she mentioned how my wife is an athlete. She then went on to say that is just who she is.

Instead of merely receiving this comment and being proud of my wife I felt judged.  I felt judged because I am not as active as I once was.  And while its true that I have balance issues, profound hearing loss and all the effects that go with hearing loss I still felt judged.

My monkey mind went crazy and created all sorts of outrageous judgements that lead to false observations.  Basically, in that moment I was judging me based on how I observed someone else’s comment.  Was I being judged or was I judging?  Maybe a bit of both.

The next evening, we had another conversation, and this one went a bit different.  Somehow, we got on the conversation of me being in Civil Air Patrol, and ROTC.  The conversation then led to me talking about all the training I had done before I lost my hearing, things like Ranger Training at Fort Benning Ga, Project X at Lackland AFS, Water Survival training at Homestead AFB with F-16 pilots and much more.

It was very interesting to me how the whole conversation felt.  It was like I had forgotten the part of me I was speaking about, and as I spoke, I began to remember.  And as I spoke, I brought out the athlete in me and became reacquainted with the version of me that had been buried in self Judgement and false Observation.

And in that moment, I saw a friend sitting next to me that did not judge me because my wife was an athlete, and I was not so much.  Instead, I saw my friend and a version of me observing and remembering something really cool about me, in a nonjudgmental way.

Welcome down the Rabbit Hole of Observation vs Judgement

← Adventure in The Making The Chakra Series →

RETURN TO YOUR SHOPPING CART

You will be taken to PayPal where you will have the choice of paying with a credit card or a PayPal account.